Q & A With Luigi Maestro 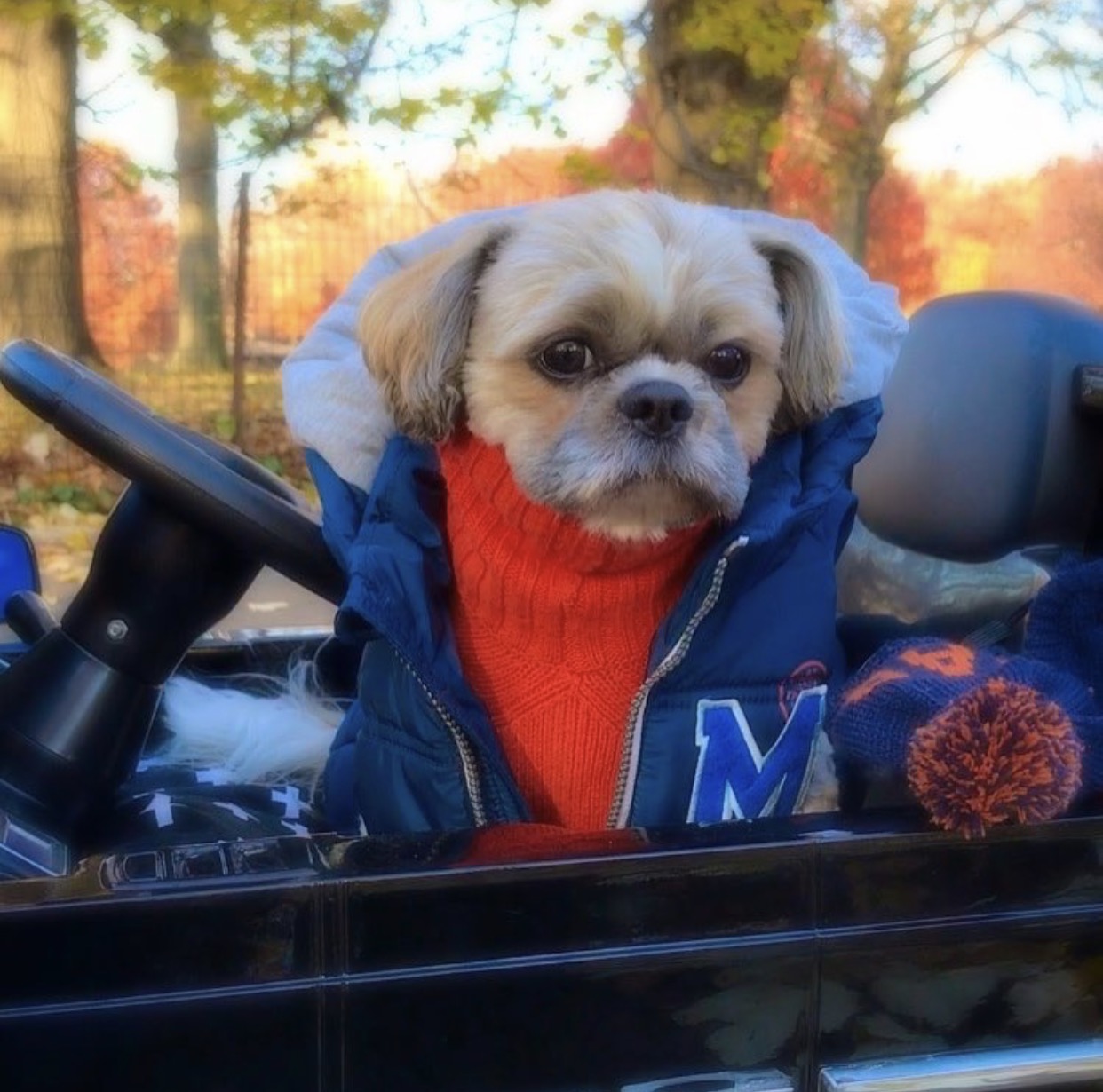 Luigi’s Job:
Luigi is a collector of cars, a metrosexual fashionista, and an NYC private investigator of all things dog related.

Where is your dog from and where does he currently reside?
Luigi was a gift from his grandpaw, Vinny. Luigi lives in New York City. For his entire life to date (Luigi is 6) he lived on the Upper East Side, but is currently in transition and about to relocate to the Gramecy Park area. 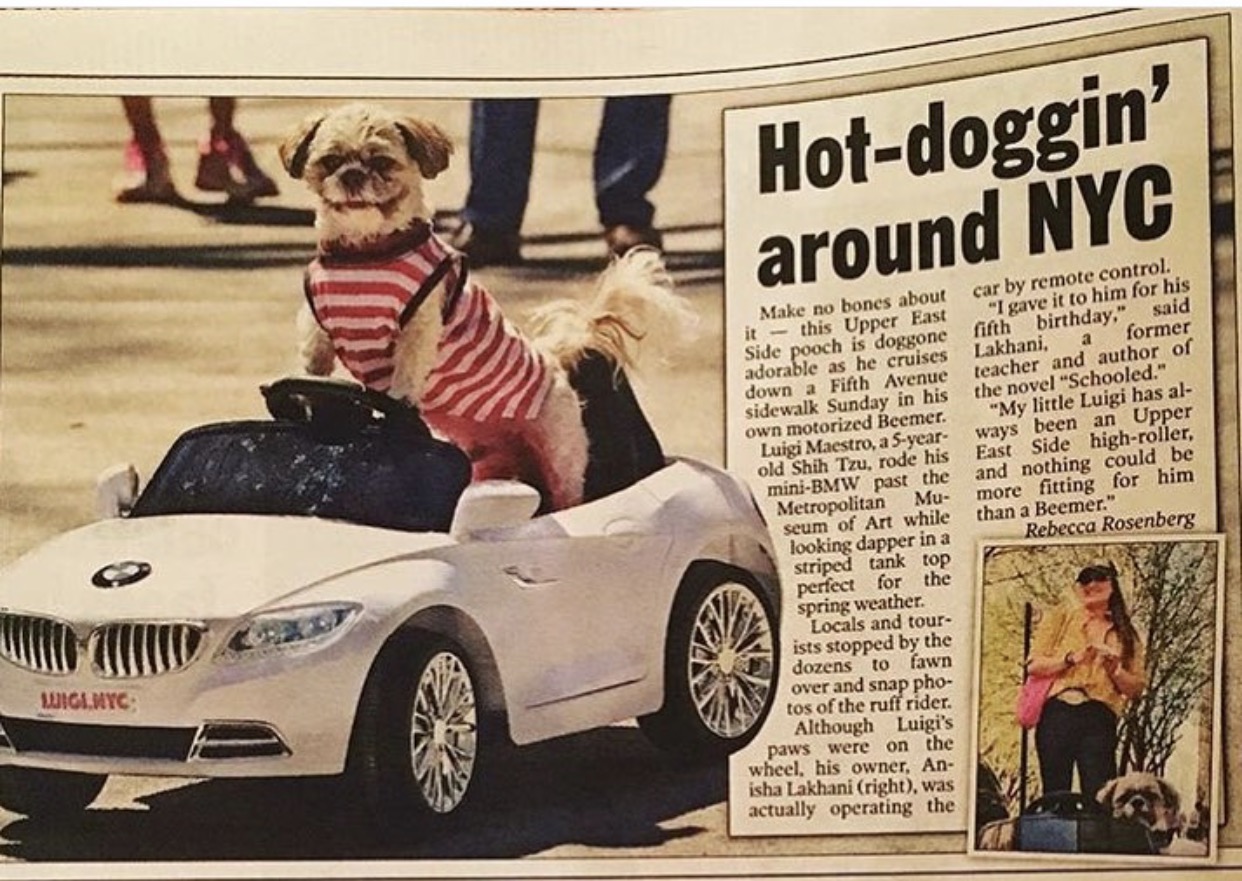 Dog’s Interests:
Luigi loves to collect cars, and sit on top of anything that rolls. He can be a little lazy, but more than laziness it is simply an idiosyncracy he has had since a puppy. From the rolling carts at Duane Reade, children’s wagons, to apartment building moving carts, when Luigi spots anything with wheels, he finds a way to sit inside, or on top of, the moving item.

Luigi is extremely interested in investigating places in New York City. He likes to find spots which are dog friendly, and making a big public stink of places which are not. Luigi can be stealthy when doing his investigative work, but he is not shy about sharing his findings on his social media account. This is where he features his best finds – outfits, cars, and even fabulous dogs he befriends at parks or dog events around the city, as well as some of the things he discovers which could be improved upon, such as the gravel in the small dog run at Madison Square Park, which hurts his paws and causes him to freeze.

Marital Status:
Luigi is single, but he is in love with a cat named Fiona who lives in a bodega on Lexington Avenue. She is not as enthusiastic about Luigi, but he is courting her earnestly, and brings her toys and treats, and at his urging, his Mommy brings him there 3-4 nights a week so he can stare at her in awe.

Dog’s Favorite Outfit / designers:
Luigi has never met an outfit he hasn’t loved. His brother, Harold Moscowitz, abhors outfits with the exception of extremely soft cashmere sweaters from Canine Styles, and the occasional hat. Luigi’s owner noticed that from an extremely young age, Luigi would willingly give his paws and help her as she put on clothes because he enjoyed wearing little sweaters, shirts, and hoodies so much. She also noticed he was more bouncy and spirited when dressed, and tended to be shy and less engaged when in his birthday suit. Harold and Luigi’s owner is a big believer in spending time to observe and understand one’s dog, because forcing clothing on dogs who hate it is not a very nice thing to do. For 12 years, she only forced coats onto Harold Moscowitz when it was extremely cold, but did not delve into the world of canine couture. Upon the arrival of Luigi, she enjoys searching for fashionable outfits for Luigi as much as he enjoys wearing them!

Luigi recently discovered @shop_dog_and_co and the store is located in the Columbus Avenue Turnstyle boutques. He met the store owner and founder, Mindy, and her dog Cheeky. The store is the canine equivalent of Barney’s – edgy, city looks – and Luigi wanted every single outfit. He purchased several. His favorites are a striped t-shirt with a red heart in the front, and a Bark Sabbath black, denim jeans jacket.

Luigi also loves FabDogInc. clothing, and like his brother Harold Moscowitz, is a pure sucker for the cashmere sweaters at Canine Styles.

Favorite Restaurant / NYC hangout:
Luigi prefers stores and “people places” to parks. While he enjoys going on walks, he is not particularly outdoorsy. You will find Luigi driving his cars in and around the streets and parks of Manhattan, and he has no qualms about driving into hotels such as The Mark and The Surrey, and will soon be making his presence known downtown!

Interesting story:
When his owner did not work from home, Luigi had a dog walker named Joan whom he is still obsessed with to this day. Joan is the female dog whisperer and if you are lucky enough to snag her (Joan has a mile long waiting list) you will have someone in your life who will change it for the better – owner, and dog. Joan said that while she has worked with, and encountered thousands of dogs in her lifetime, Luigi is the kindest dog she has ever known. She dubbed him ‘Baby Jesus’ when he was very little, and the quirky name stuck. Luigi will never snap, bite, or do anything to harm a living being. Children can pull on his tail, other dogs can hump him, the vet can inject him with a needle, but Luigi will never react in a mean way.

Luigi does, however, suffer from bi-polar disorder. Anyone who spends time with him will quickly observe he has very high highs, and then random low lows. He can go from jumping and playing to sitting solemnly in a corner looking like the sky is falling. These low episodes are not borne of anything in particular; they just happen. Then, just as suddenly, he becomes extremely engaged and happy once more. It is one of the most amusingly odd things to witness.

Charity or cause:
Luigi supports any and every charity or cause that supports bettering the lives of all animals. But his personal goal, and one which he is formulating a rather comprehensive plan to raise funds and awareness, is to make New York a completely no-kill shelter state. He has noted this as a goal on the website of the Mayor’s Animal Alliance, and you will be hearing soon of the things Luigi plans to do to help not only further this goal, but to achieve it. 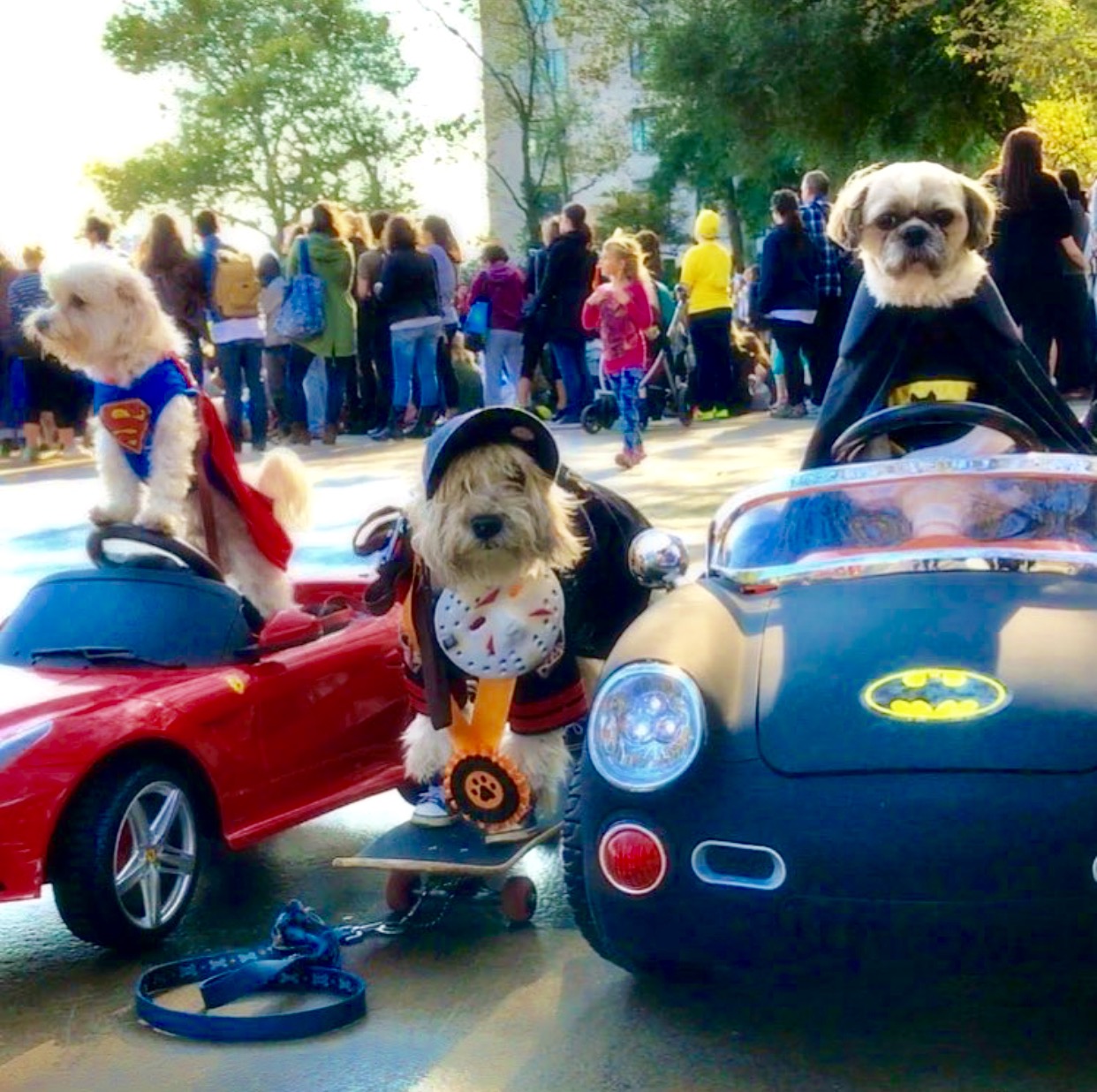 Owner’s Occupation: Anisha Lakhani is the author of Schooled, a fictional novel loosely based on her experience teaching for a decade at one of New York’s private schools. She is also a freelance journalist (Teen Vogue, India Vogue, Conde Nast Traveler, Quest Magazine, Huffington Post and more), screenwriter, and web & graphic designer.